Three years ago, a single picture took me halfway around the world. It was a picture of the cliffs surrounding Lake Michaelson on Mount Kenya. A lone figure stood on the edge of the cliff, looking down to the dark inky lake. Aptly named ‘The Temple’, these towering yellow cliffs became my fixation, and I wanted to make the pilgrimage there.

I managed to BASE jump from the same spot in the photo, but I set a new goal when I looked further up the mountain to the great peaks of Batian and Nelion. I knew I would have to return – which I did two years later. I wanted to be the first person to wingsuit in Kenya, but the experience soon became about much more than just the jump. I got to know my team, explore the grand massif, and learn about the community and my own limits.

"I wanted to be the first person to wingsuit in Kenya, but the experience soon became about much more than just the jump." 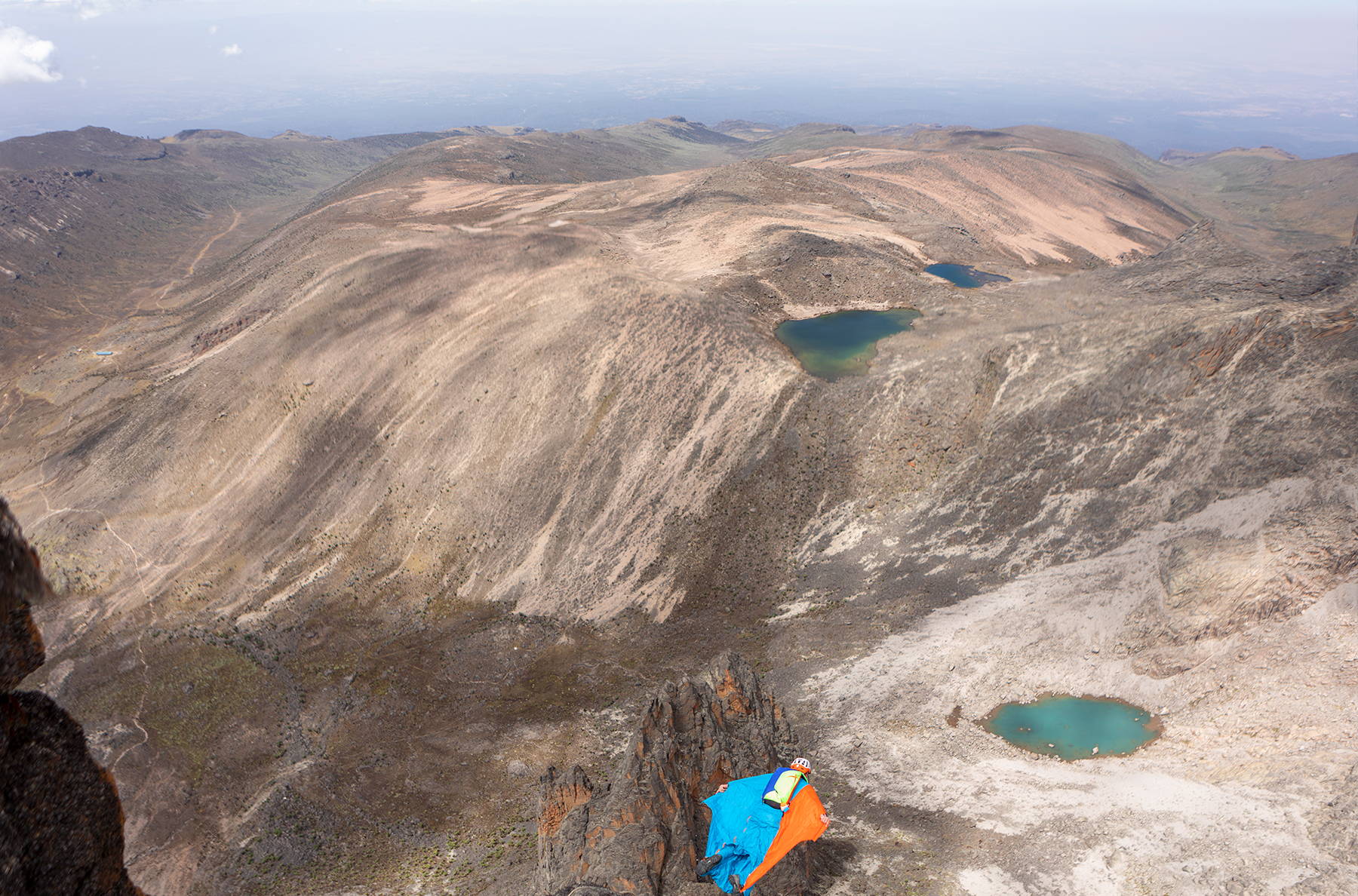 "I wanted to be the first person to wingsuit in Kenya, but the experience soon became about much more than just the jump."

I met Ewan at the airport in the early hours. I had already spent a day in Nairobi – enough time to sort out the logistics and supplies for our week up the mountain. Ewan had no time to relax before we were in a taxi heading straight to the park gate. We hadn’t met before, but after years of chatting online, the stars aligned and this trip seemed to be a perfect fit. It’s always daunting to go on an expedition with someone you haven’t met before. But I’ve often found that personality and willingness are enough to make a successful team.

We entered the park through the main gate, allowing me to experience a different side of the mountain to my first trip. That route from three years ago was littered with old rubber soles from hardy porters and guides, but this trail was frequented by buffalo. Our porter, Steve, led the way at a steady pace, as our heavy loads crushed our shoulders. On the final leg, the sun set behind us, silhouetting the eerie shrubs in the valley. I paused to admire the view, literally lost for words as the altitude and the 35kg pack crushing my diaphragm took my breath away. 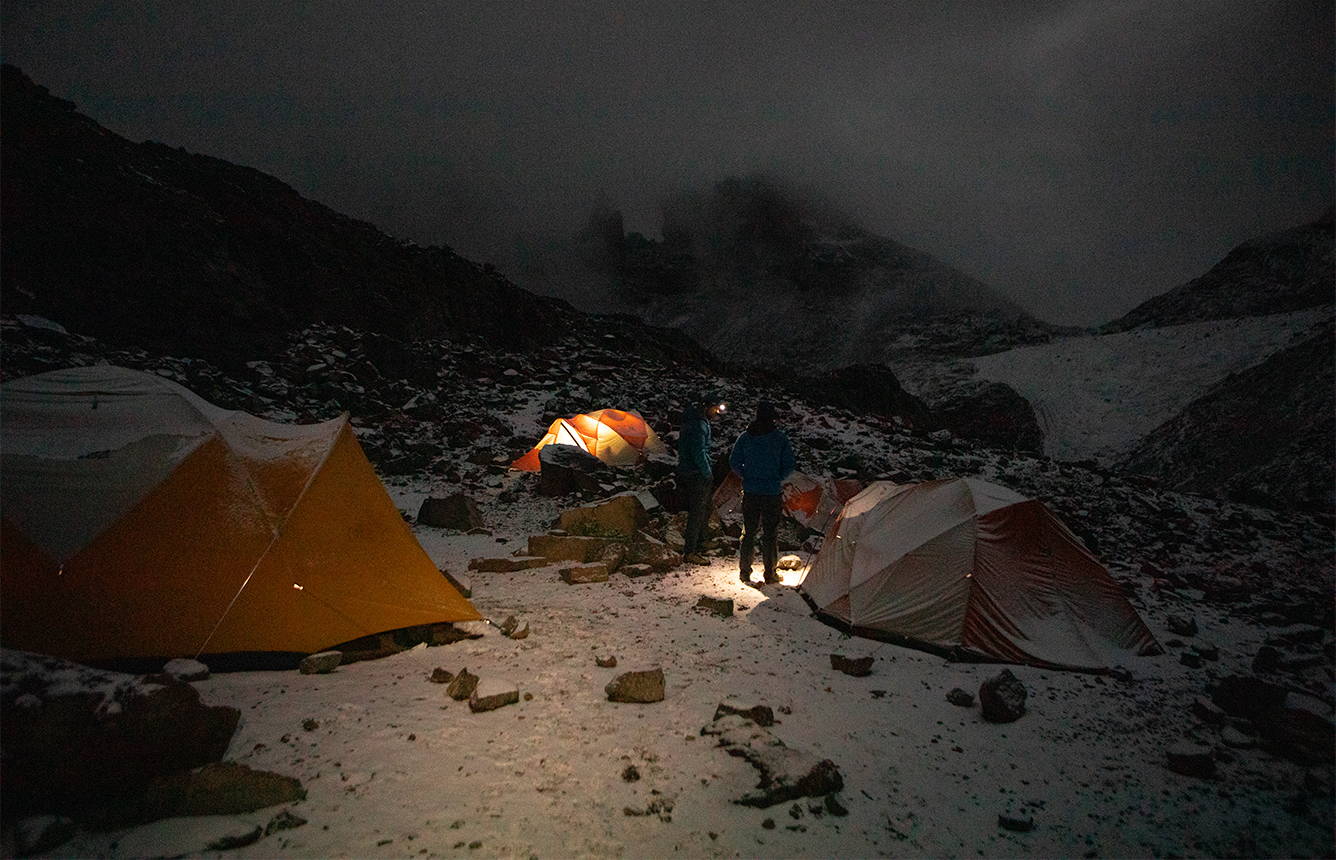 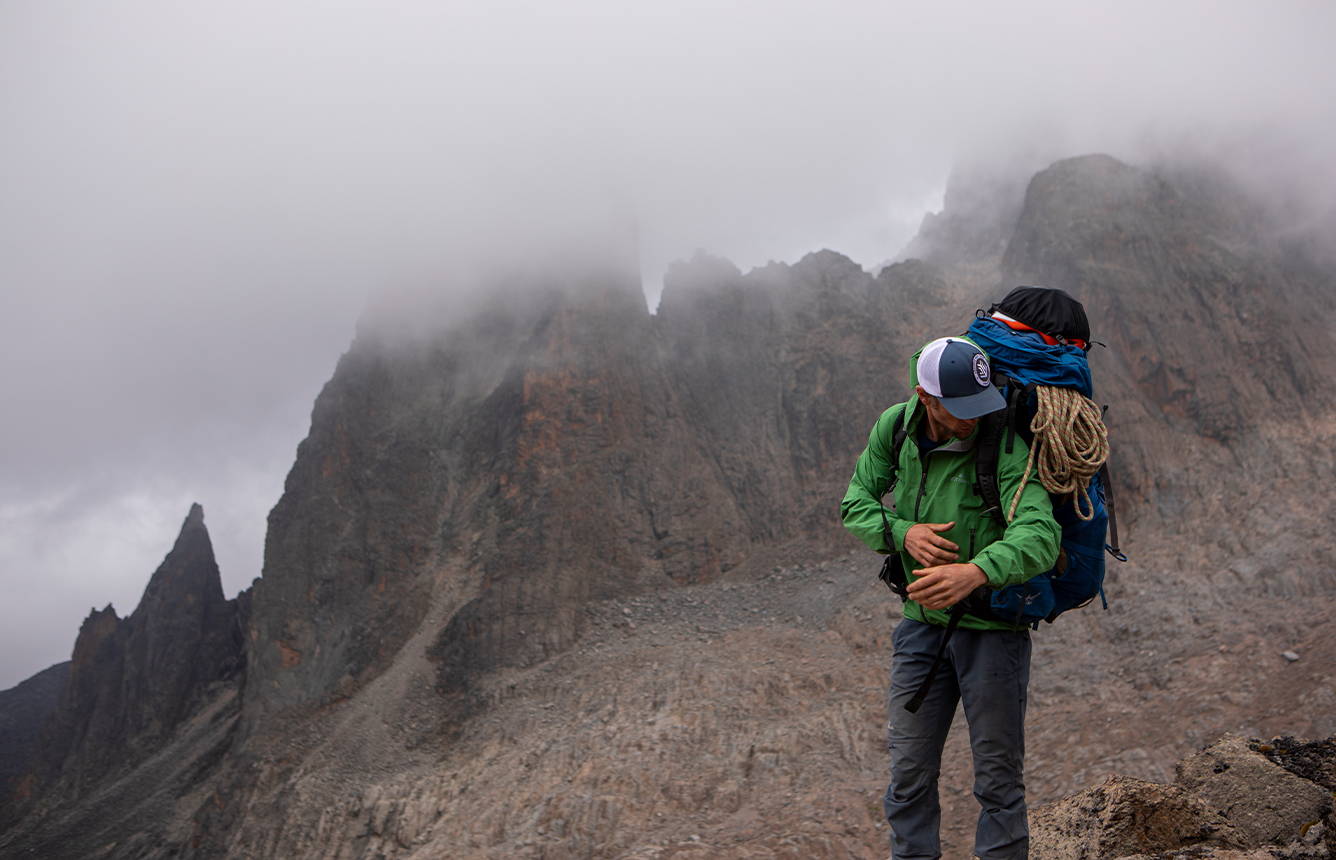 The next day we moved to a higher base camp, at the foot of the mountain’s imposing, jagged peaks. We could see some of the last African glaciers from our tent, which were a fraction of their size in the photos of our 10-year-old guidebook. It was a drastic reminder of the changing fortunes of our climate. This was a recce day, to gather as much information as possible to make the day of the jump easier and smoother, and to take away as much uncertainty as possible.

The locusts had started gathering, and I received a constant battering from the beasts as we made our way up the never-ending scree slope. It felt like they had a personal vendetta against me. I sat down for a moment to get my breath back, and reached into my side pouch to grab a handful of Haribo, now tinged with the flavour of kerosene. We looked up to the peaks and could see our route. It was more than a scramble. We would need to climb the route in five pitches, belaying each other as we went. This was a problem, because if I jumped, Ewan couldn’t find a way down by himself. 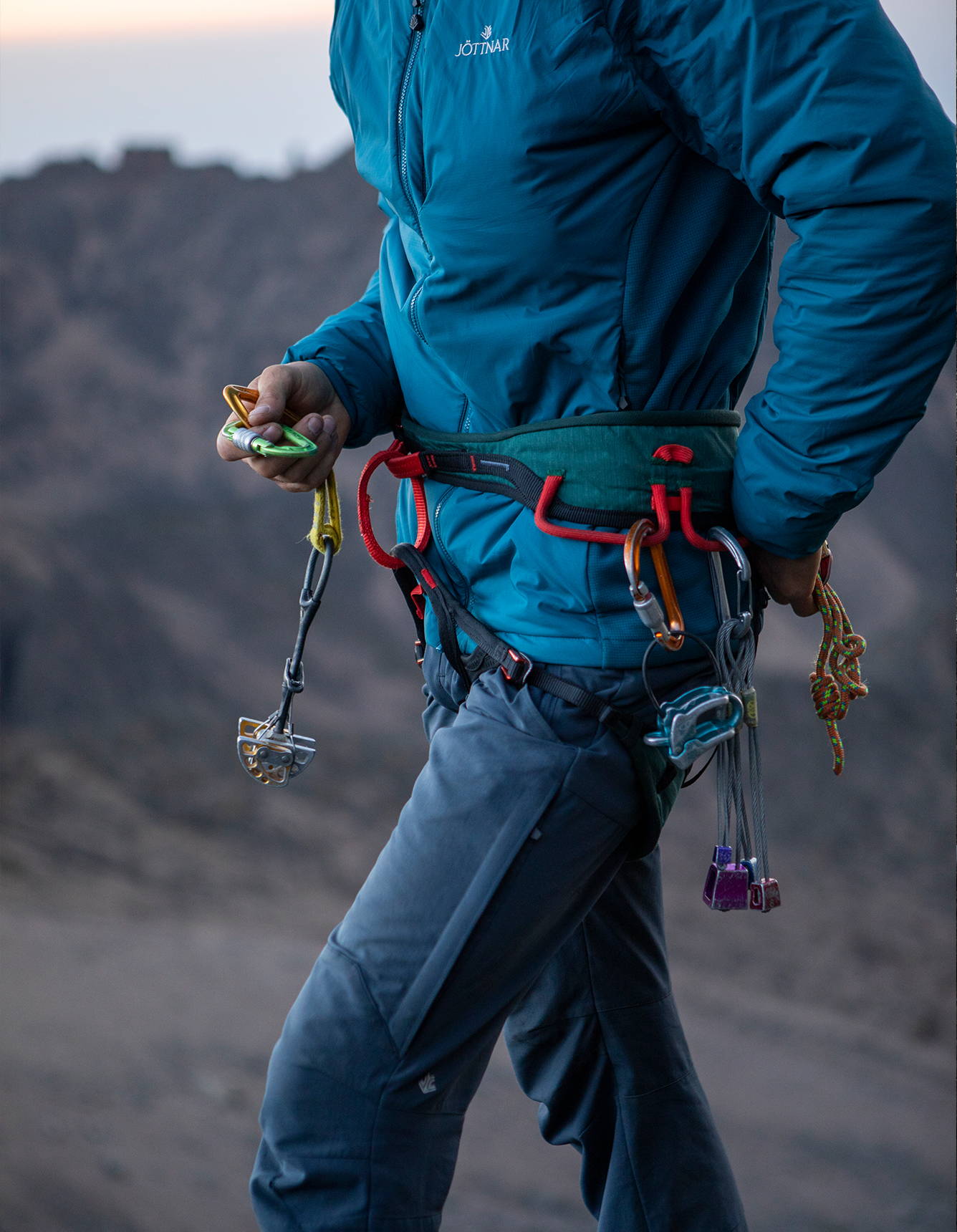 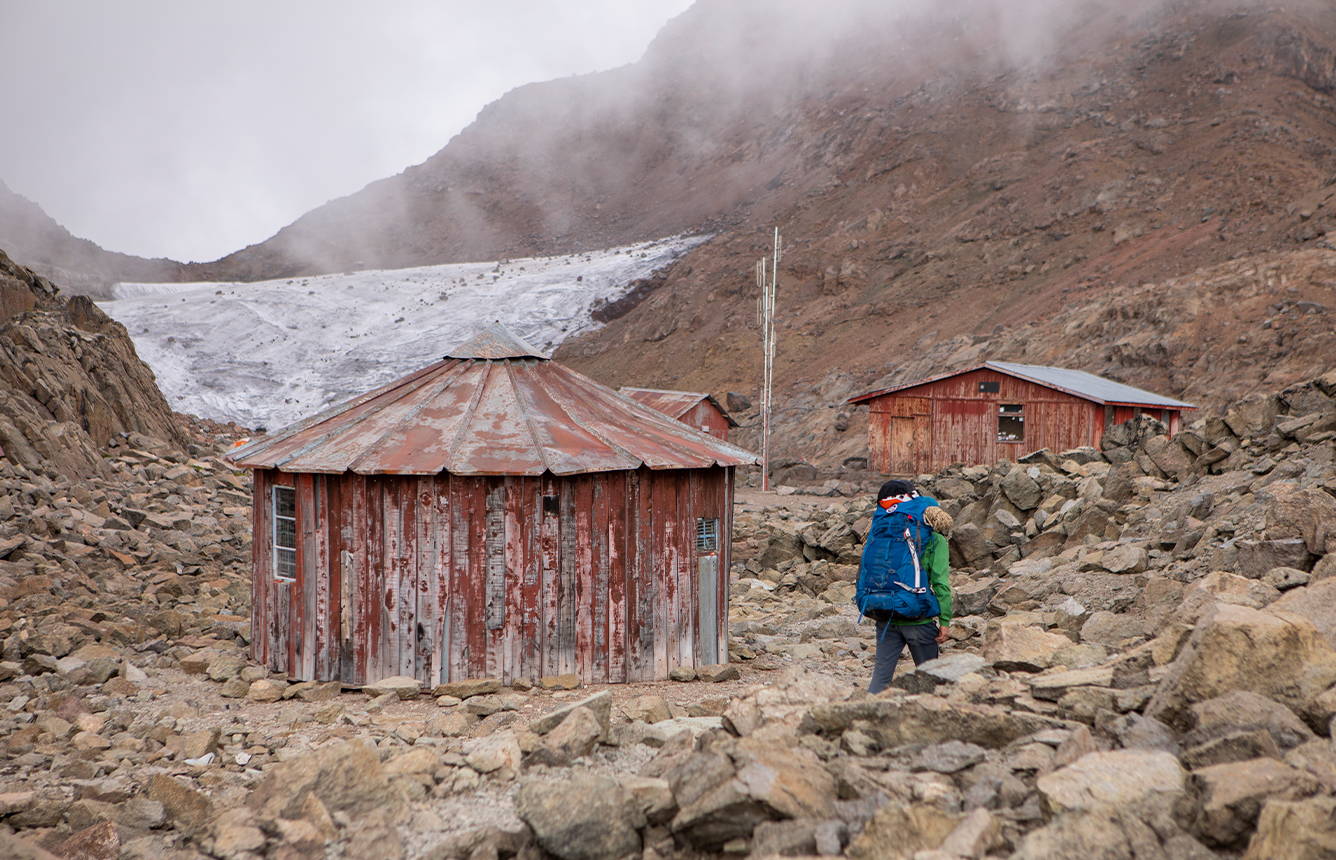 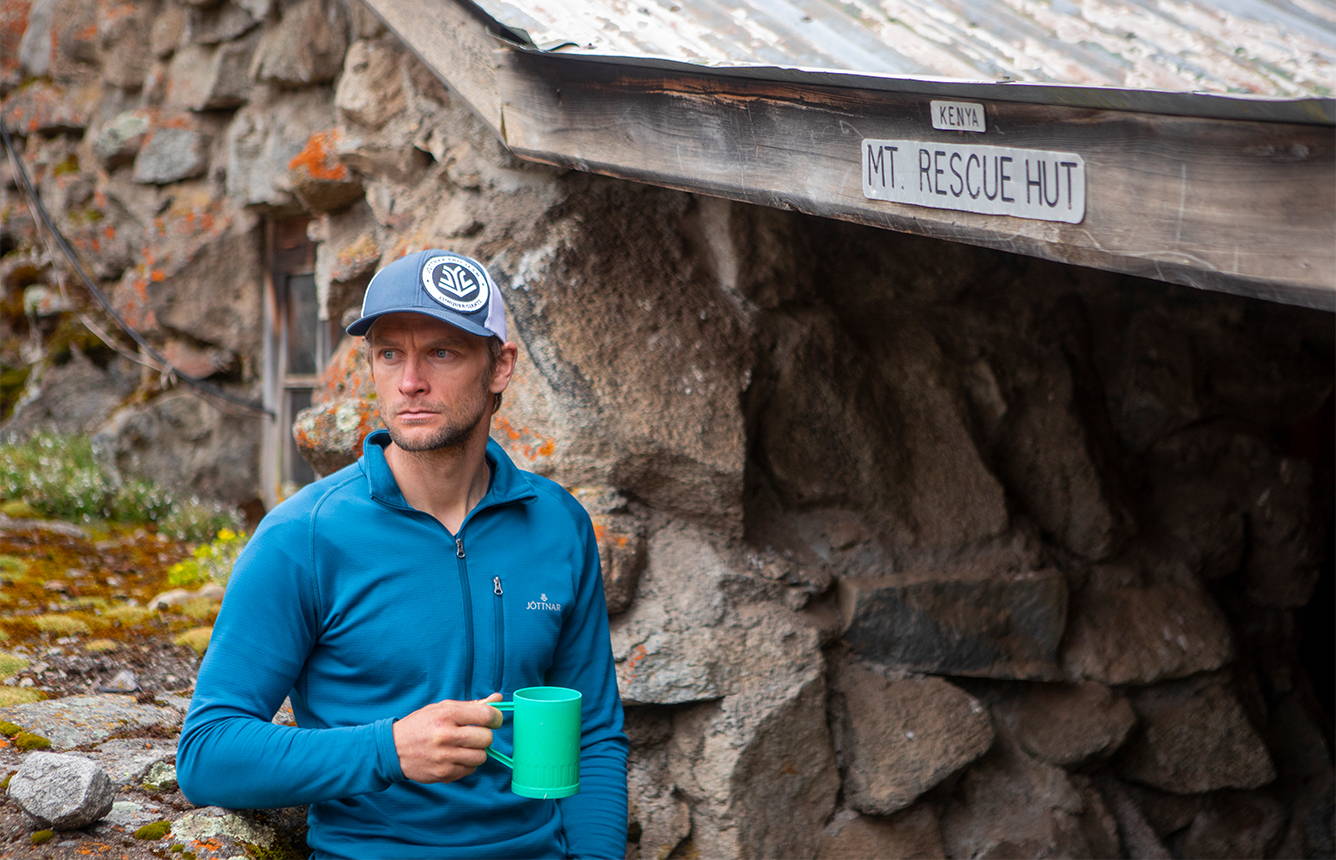 But problems are just obstacles to overcome, and determination and hard work solve most issues. If it just requires more work and effort, then it's an easy solution in my mind. The plan would be to climb with Ewan to the summit. I would then fly down to camp, drop my kit, run to the start, solo the route back up to Ewan and abseil down with him.

We opted for an alpine start, aiming to be at the base of the climb as the sun was rising. We stumbled out of our campsite, the moon in the clear sky illuminating our path. The southern gully of Point John is equal in quality and aesthetics to any mountaineering route in my local playground of Mont Blanc. The fact that I was in Africa, looking down onto a glacier, just added to the atmosphere of this route. I climbed with a rope, but put myself in the mindset of soloing the route, checking every hold and remembering any moves. I wanted to be as confident as I could for my climb back up after the flight. 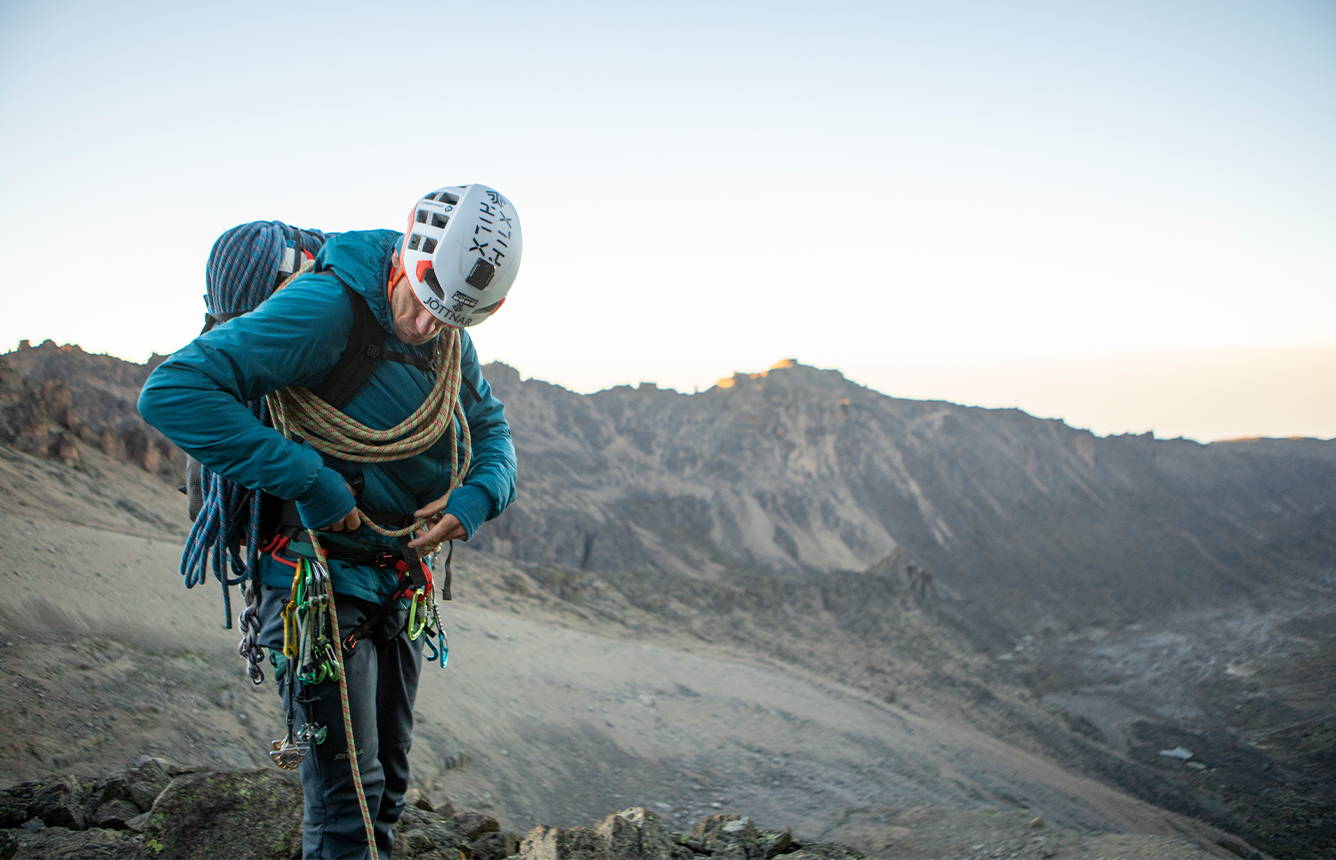 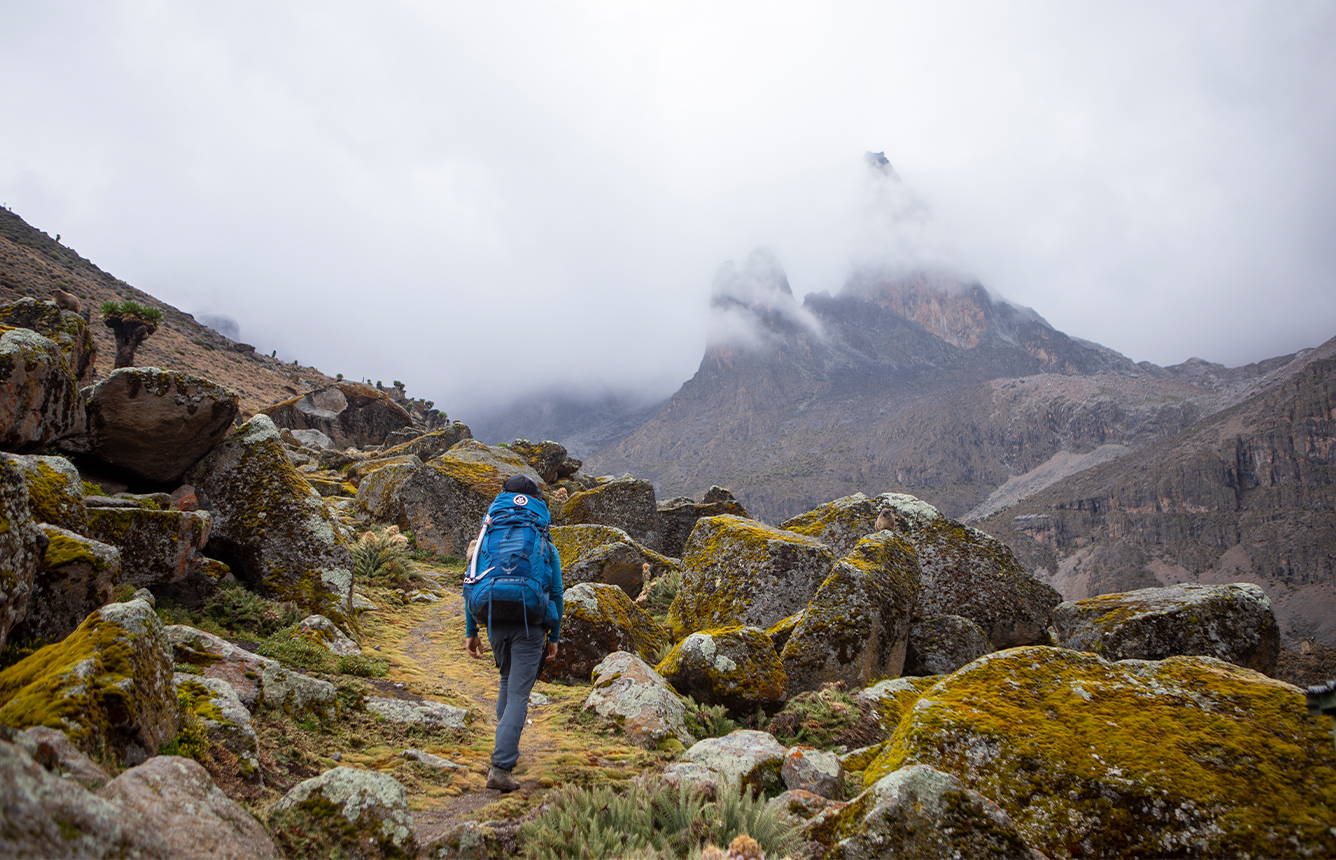 After two hours of climbing, we reached the summit of Point John. Straddling the pinnacle at 4,883m, we were able to view our surroundings from a new perspective. Now I had to find an exit point. Abseiling down the southern side, I used my laser range finder to calculate my flight. I spotted a potential exit point, but it would need a strong push to clear a ledge that jutted out 60m below.

I still wasn’t sure if I was going to jump, but I geared up anyway – my way of managing time. The weather window is often small; jumps can be lost or won by minutes, so being as efficient as possible is always important. Although gearing up gives me a subconscious prompt that I’m planning on jumping, it’s important to think rationally and take all emotion away from high-risk decision making. It’s easier said than done, but experience counts for a lot. 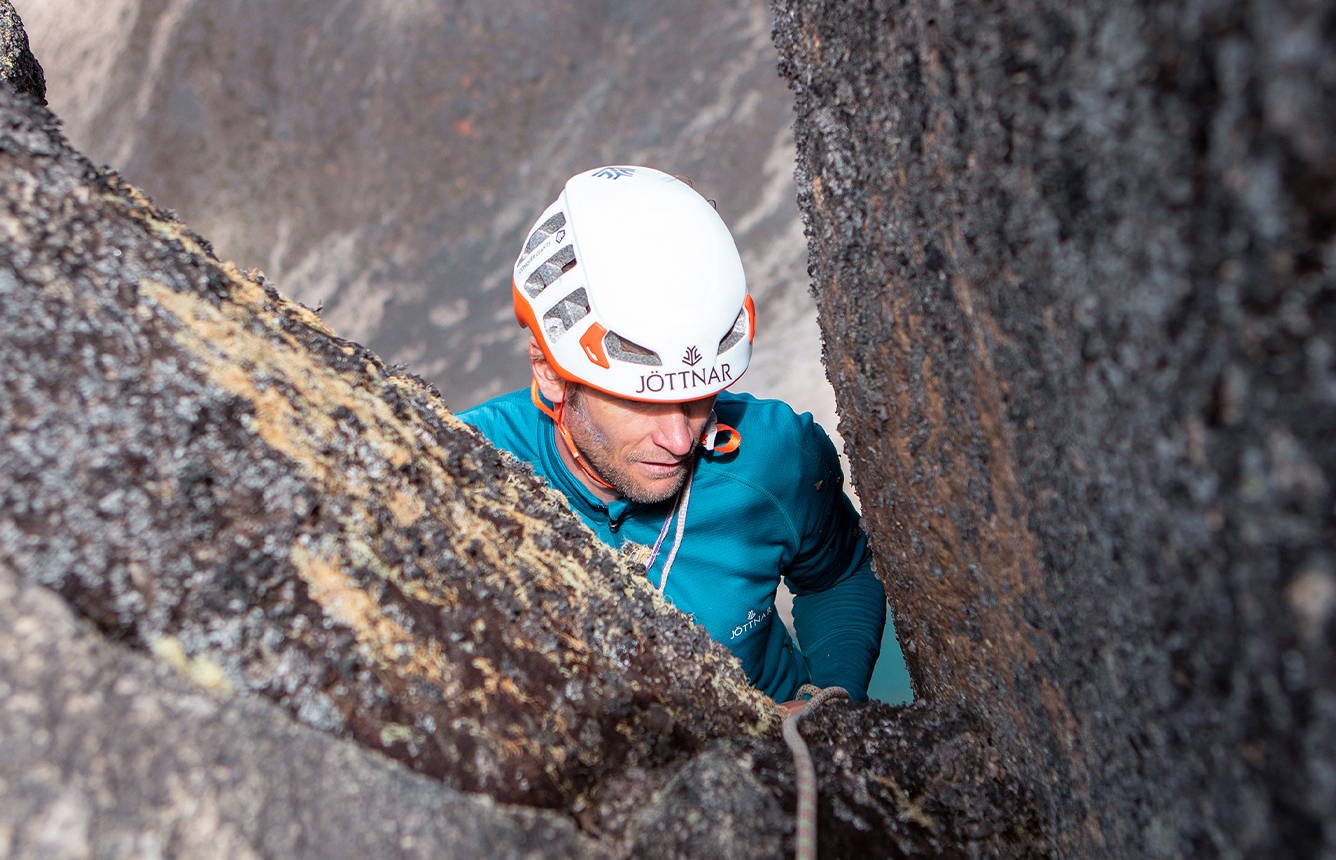 I abseiled down the fixed line to the edge of the cliff, restricted in my wingsuit. My legs and arms were now zipped up in the colorful body bag. I steadied my breathing, precisely placed my feet and listened to the wind. I counted down from three, and with one foot in front of the other, gave a solid push from my right foot – not enough to compromise my body position but enough to clear the ledge below.

After an initial drop, the wingsuit pressurised and I started gaining forward momentum. These mountain playgrounds of towers, gullies and glaciers often have complicated airstreams that add turbulence to my flights. It’s always best to play it safe, so after cornering a tall tower called Midget Peak, I made a straight line for our campsite. 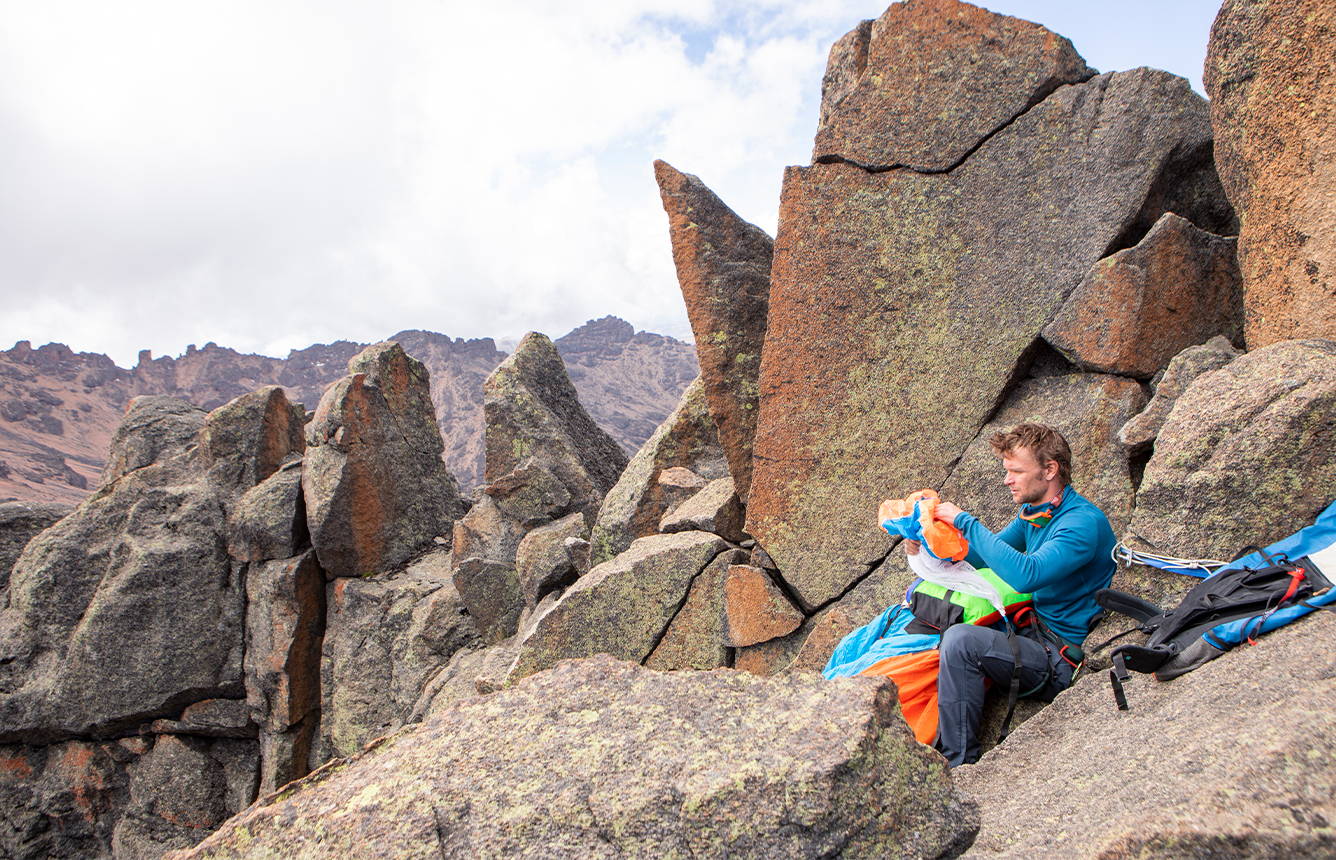 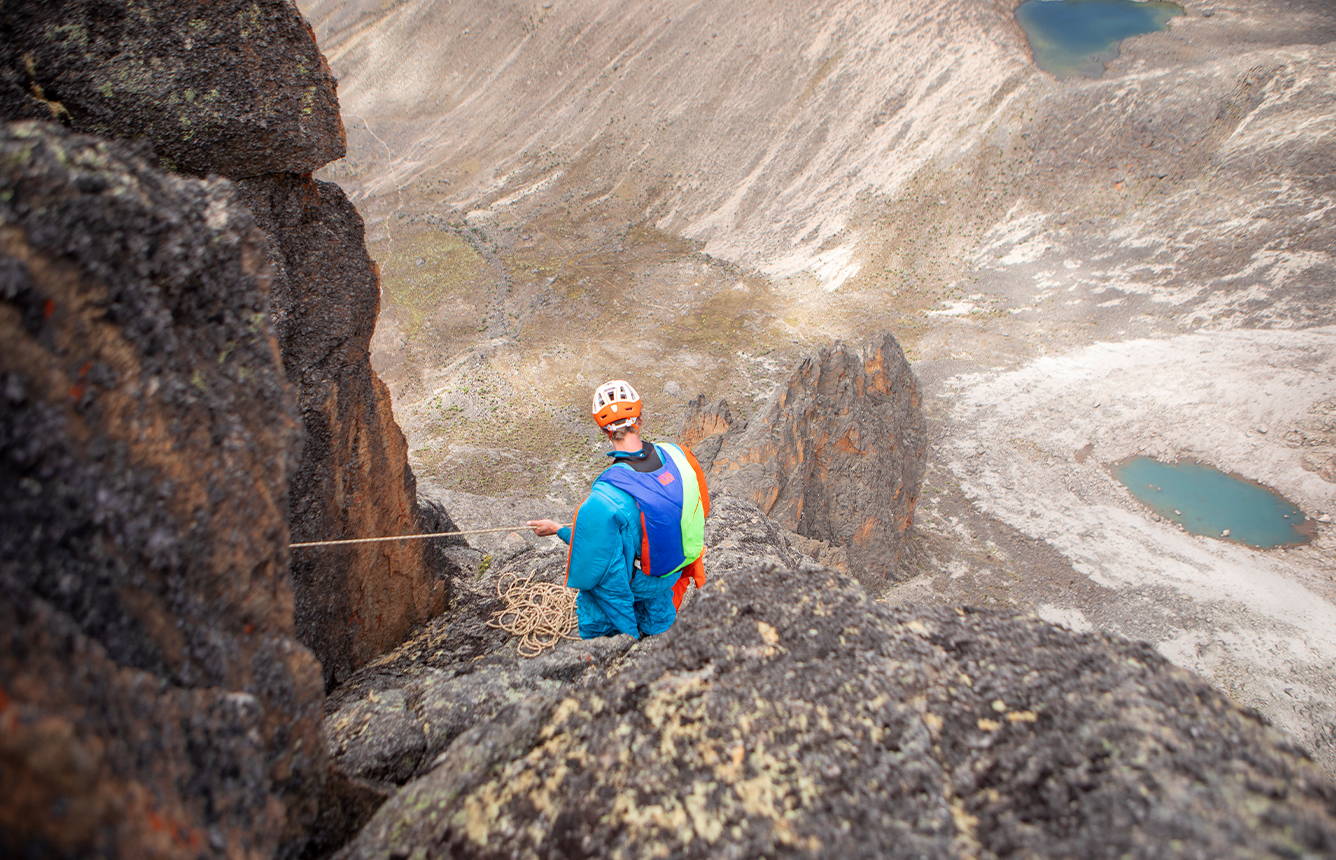 Intuition tells me when to pull my parachute. I judged the topography of the terrain and reached back to pull the pilot chute – an air anchor which pulls out the main parachute. A life-affirming jolt followed, as 260 square feet of fabric slowed down my flight from 160 to 30 kph. I quickly unzipped my wingsuit so I could reach my toggles and control the canopy. I was lower than I wanted to be, and the complicated winds were at my tail, sending me into a hazardous boulder field with speed. I scanned the ground for a suitable landing spot among ankle-breaking rocks. I pulled my toggles to flare the canopy, ran off the landing and came to a halt as my canopy lost pressure and slumped to the floor.

I also felt like slumping to the floor. I had done it, but I didn’t feel fully satisfied. It was a successful jump, but I also felt like the margin was too fine. Wingsuiting on expeditions is intimidating. I often have to change the level of risk I’m willing to accept, and maybe this was a step out of my comfort zone in such a remote location.

"I often have to change the level of risk I’m willing to accept, and maybe this was a step out of my comfort zone in such a remote location." 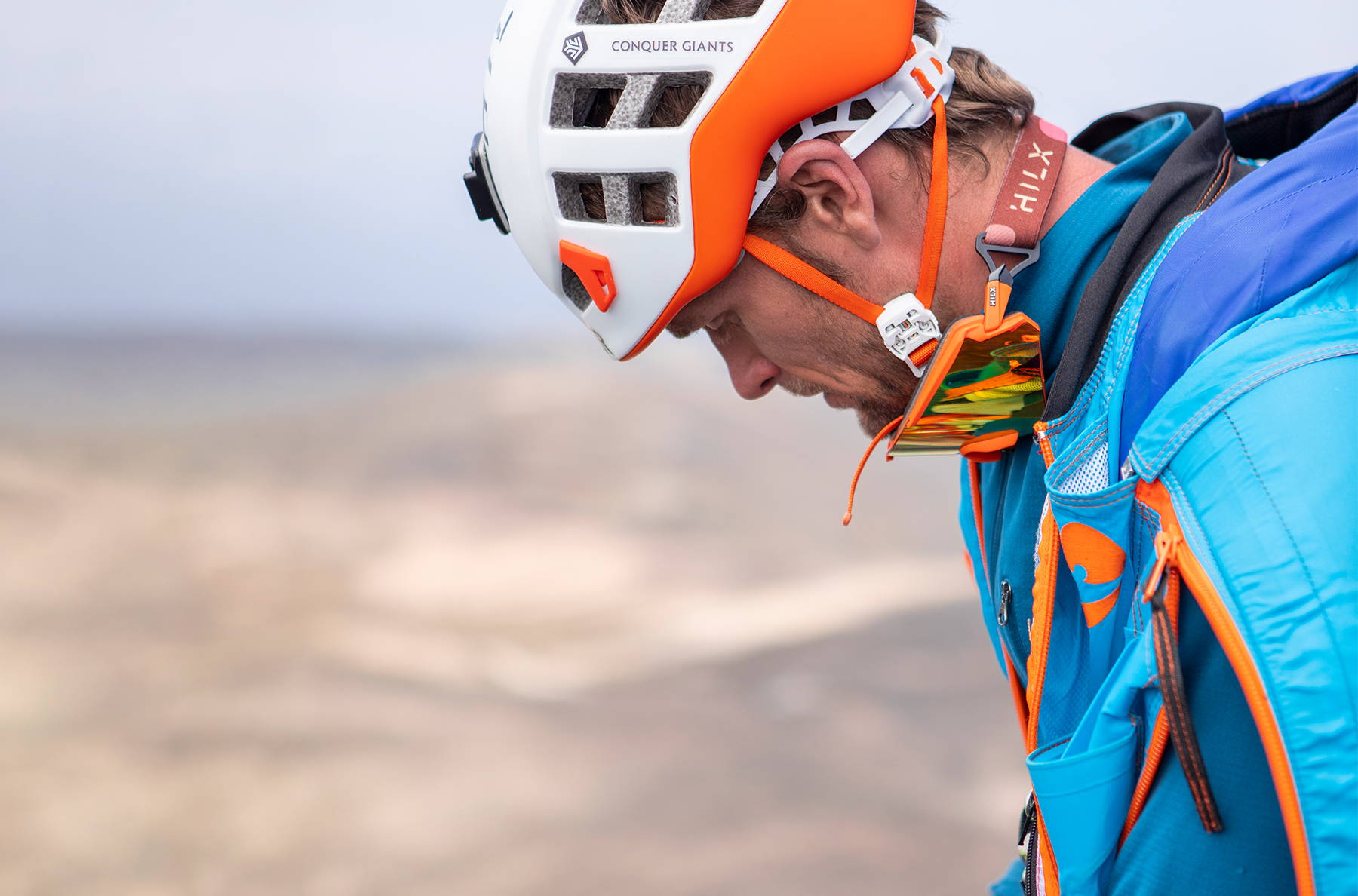 "I often have to change the level of risk I’m willing to accept, and maybe this was a step out of my comfort zone in such a remote location."

I dumped my gear back at the tent, only keeping my helmet, harness and abseil device. I looked back up to the peak where I had just jumped from. I felt the first wave of accomplishment, but the day was not over. I was looking forward to seeing Ewan again, and we could only celebrate when we were both back down at base camp. After three years of planning, I had finally succeeded in my goal of becoming the first person to wingsuit BASE jump in Kenya.

One project leads to another, an idea grows from experience. I’m already planning my return.

Tim Howell is a member of the Jöttnar Pro Team. Find out more here.