Free solo rock climbing is an activity that channels an extreme intensity of experience, with few sports offering this level of consequence to action. Who would choose to climb in this style, for what reason, and what - if any - link exists between adventure sports and warfare?

Like the rampart of a fortified palace on an impossible scale, the West Buttress of Clogwyn Du'r Arddu commands the lonely landscape it surveys from high on the flanks of Snowdon, the highest mountain in England and Wales. For a climber, on a fine day it’s simply one of the best places in the world you could hope to be.

The slab rises for over five hundred feet until it merges into the late afternoon sky. I can’t see the top. From the tiny ledge at the base where I’m fastening the velcro on my rock shoes, I can’t actually see the middle section of the route; the whole thing just reels skywards. Soon I’m ready, though, and I set off. I climb slowly and carefully, making every move with attention as I try to find a rhythm between the rock and my own breathing. I quickly gain height, and after a few minutes I’m past the second belay stance. A few pitches higher, I arrive at the crux of the whole route, several hundred feet above the ground; a delicate rising traverse above the void between the wall and the inky waters of the mountain lake a long way below. 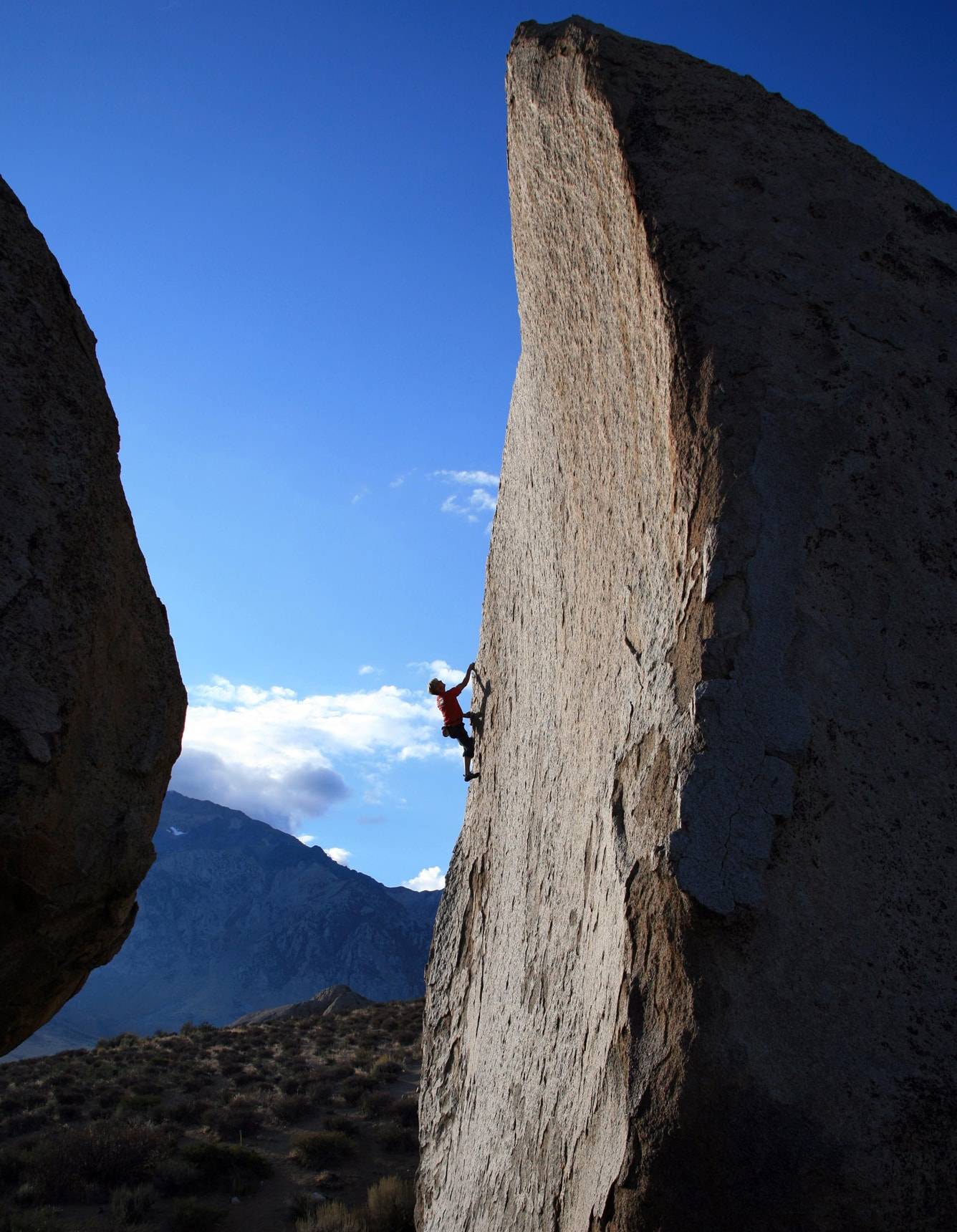 The author soloing a classic line on the legendary granite boulders at Bishop, California

Here, a precise and perfectly balanced sequence of moves unlocks the upper section of the slab. Now I can see the turreted boiler-plates of Cloggy’s upper ramparts, where the huge cliff abruptly stops and the mountain begins again. In what seems like a brief moment, the slab has disappeared into the shadows beneath, and I’m blinking as the sun begins to filter over the line of the ridge a hundred feet above. I check the time; I’ve been climbing for just over half an hour. Yet it seems like much longer, so intense was my concentration and focus for that short time. The climb was not a difficult one, and I'd climbed well within my limits, but the experience of being alone on one of the greatest rock faces in Britain was unforgettable. For those short moments, I was a tiny life-form moving across the vast surface of geological time - a rare gift.

"Those close encounters with mortality taught me a great deal about how far, and how fast, it’s possible to tread the thin line between courage and stupidity."

I went up to Cloggy that hazy summer afternoon simply to climb a classic line I’d always wanted to do. And I specifically wanted to climb it alone, without ropes, using skill and experience instead of climbing hardware as a safety system. There is no question, in my mind, that free soloing will always be the ultimate style of ascent. As a young climber, I climbed free solo frequently. I’ve never had a serious accident whilst soloing, but definitely had a few near misses. Those close encounters with mortality taught me a great deal about how far, and how fast, it’s possible to tread the thin line between courage and stupidity.

As I grew older, I began to understand more about the role probability has in increasing the risk correlation with every repeated exposure to danger. So I began to reduce both the number of climbs I free soloed, and also the difficulty of the routes I did climb solo. But I didn’t stop soloing entirely. For as long as I can climb, I’ll never stop soloing altogether, for a very simple reason. Free soloing is an experience that throws you into the heart of your own life, and into the core of what it means to be human. 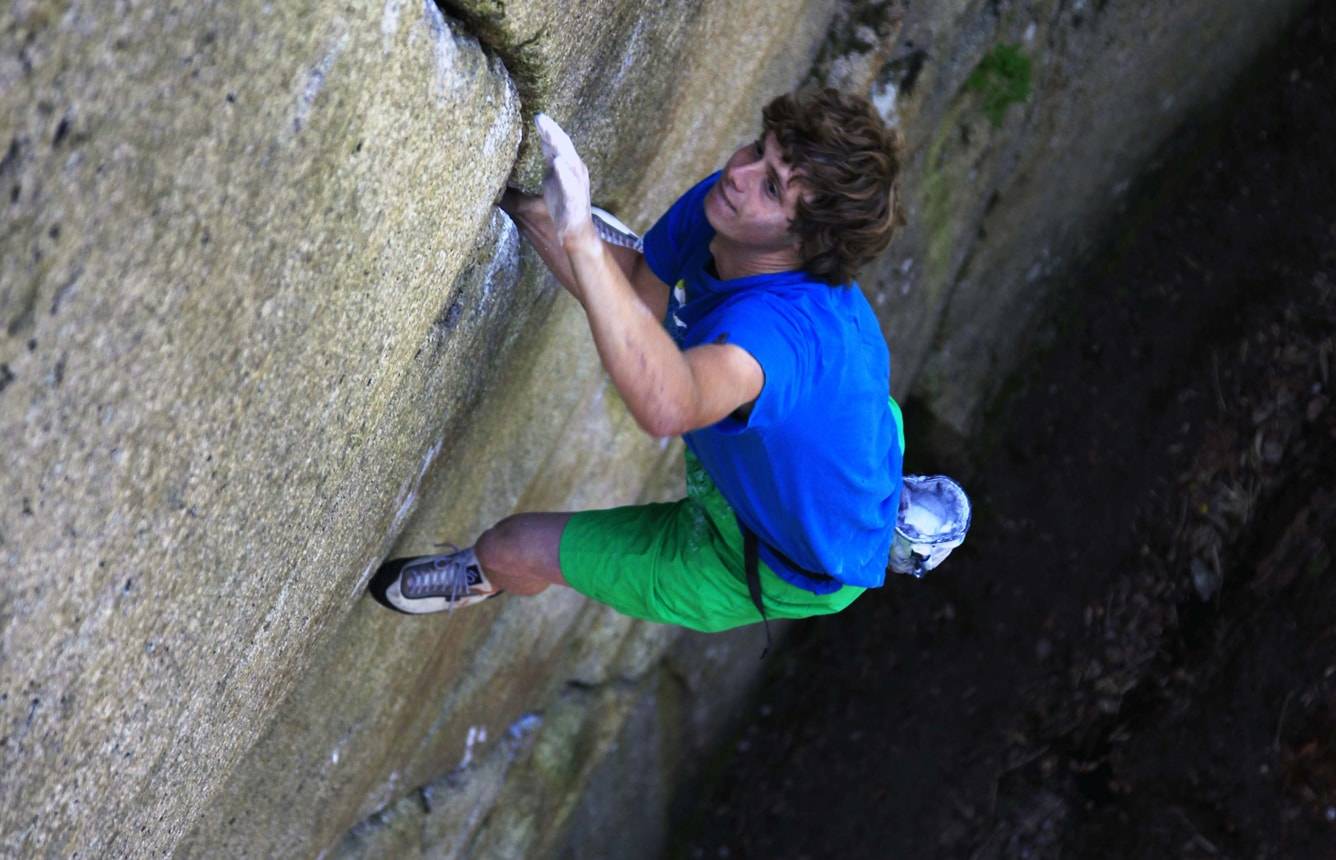 Top Canadian climber Will Stanhope free soloing the hard single pitch climb Zap Crack (5.13 or E7) at Squamish, Canada. A very high level of skill and mental control is required to free solo a route of this difficulty. 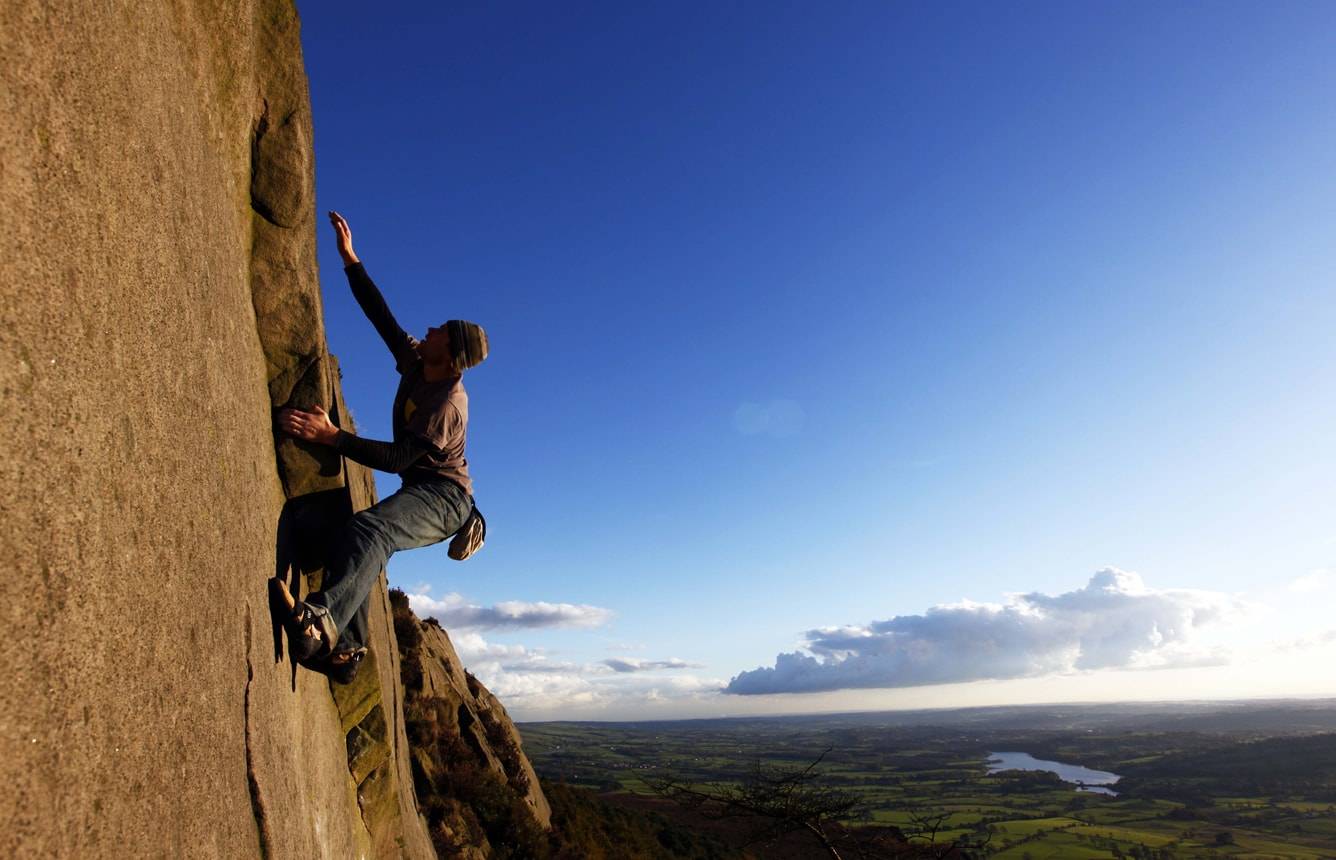 The good thing about free soloing, in one respect, is that it’s not necessary to solo a route that pushes you way outside your comfort zone to have a great experience. Some of the best soloing experiences, in fact, take place on routes well within your limits. That way, you can appreciate the situation without being overwhelmed by it.

Risk means different things to different people. For some, just walking to the top of Snowdon might be an adventure of a lifetime. On the other end of the scale, the kind of free soloing I’ve done in my climbing life might look relatively casual in comparison to the exploits of some of world’s most accomplished solo climbers, such as the late Swiss super-soloist Ueli Steck, or American climber Alex Honnold, whose free solo ascent of El Capitan in Yosemite is, in my view, the most impressive sporting achievement in history from the perspective of psychological control.

Free solo rock climbing is an activity that channels an extreme intensity of experience. If you get everything right you’ll be okay, but if you make a serious mistake - or if something happens that’s completely outside your control - you might die. Very few sporting experiences offer this level of consequence to action. The risks of soloing are much closer, I’d argue, to those involved in a military operation than those involved in most conventional sports.

“Free solo rock climbing is an activity that channels an extreme intensity of experience. If you get it right you’ll be okay, but if you make a mistake you might die”

The American artist, author, nightclub owner and bullfighter Barnaby Conrad famously claimed that ‘there are only three sports: bullfighting, motor racing, and mountaineering; all the rest are merely games’ [the phrase is frequently mistakenly credited to Ernest Hemingway]. The point behind Conrad’s brilliant quip, I think, is that any sport requires some degree of exposure to danger - perhaps even a risk of death - to have real meaning. If you’re not risking something, Conrad seems to be saying, then you’re not experiencing anything either.

It’s a powerful message, and possibly underscores the very old argument about sport originally being a psychological and physical replacement of warfare, and a preparation for it if required. Far from being a modern invention, it’s likely that sport is as old as human society itself. Some of the 15,300 year-old Cave paintings at Lascaux in France, for example, seemingly depict scenes of sprinting and wrestling. The fact that the vast majority of organised, competitive sports today involve minimal actual danger does not undermine the intriguing link between sport and warfare; you only have to watch five minutes of rugby to see the point. 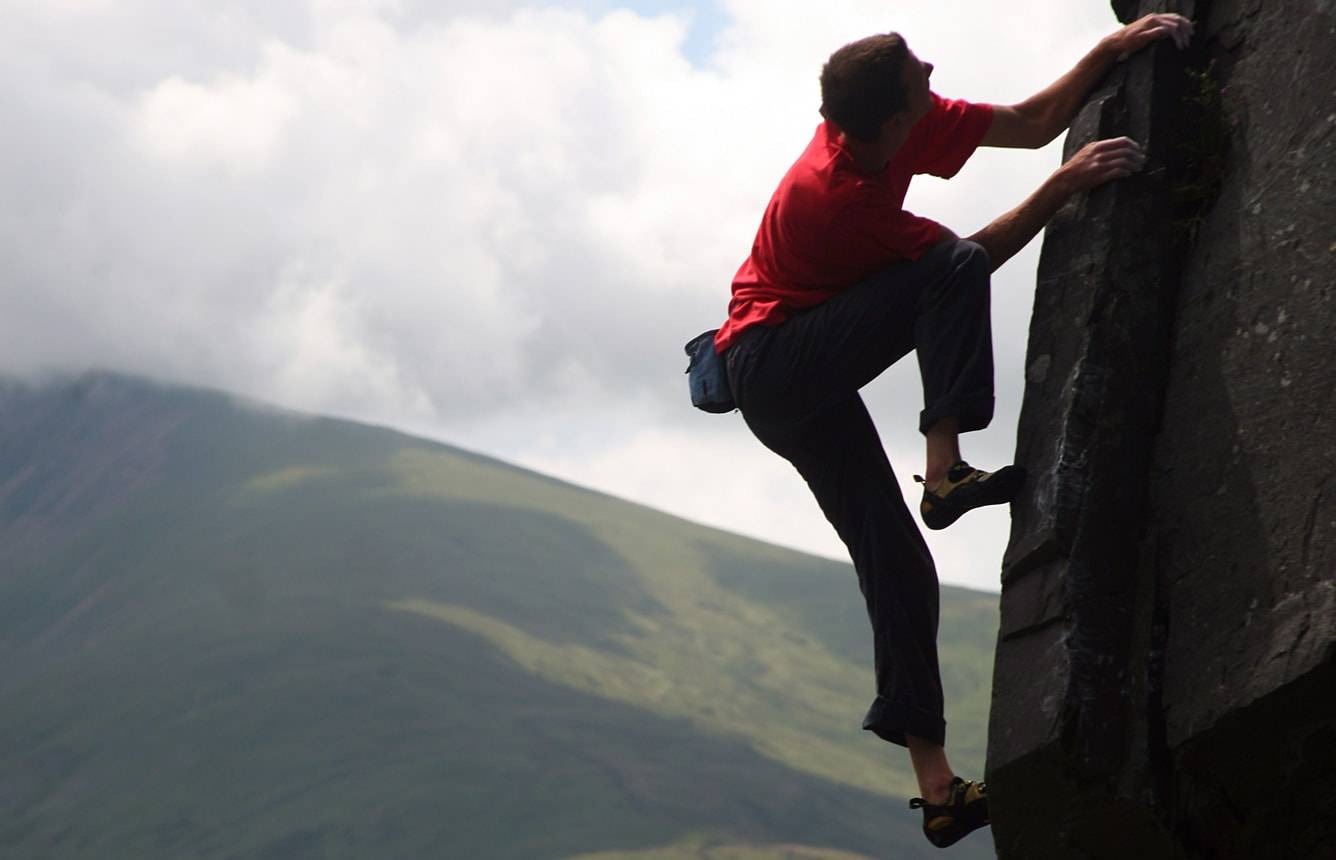 A soloist catches a moment of balance in the Dinorwig slate quarries, North Wales. 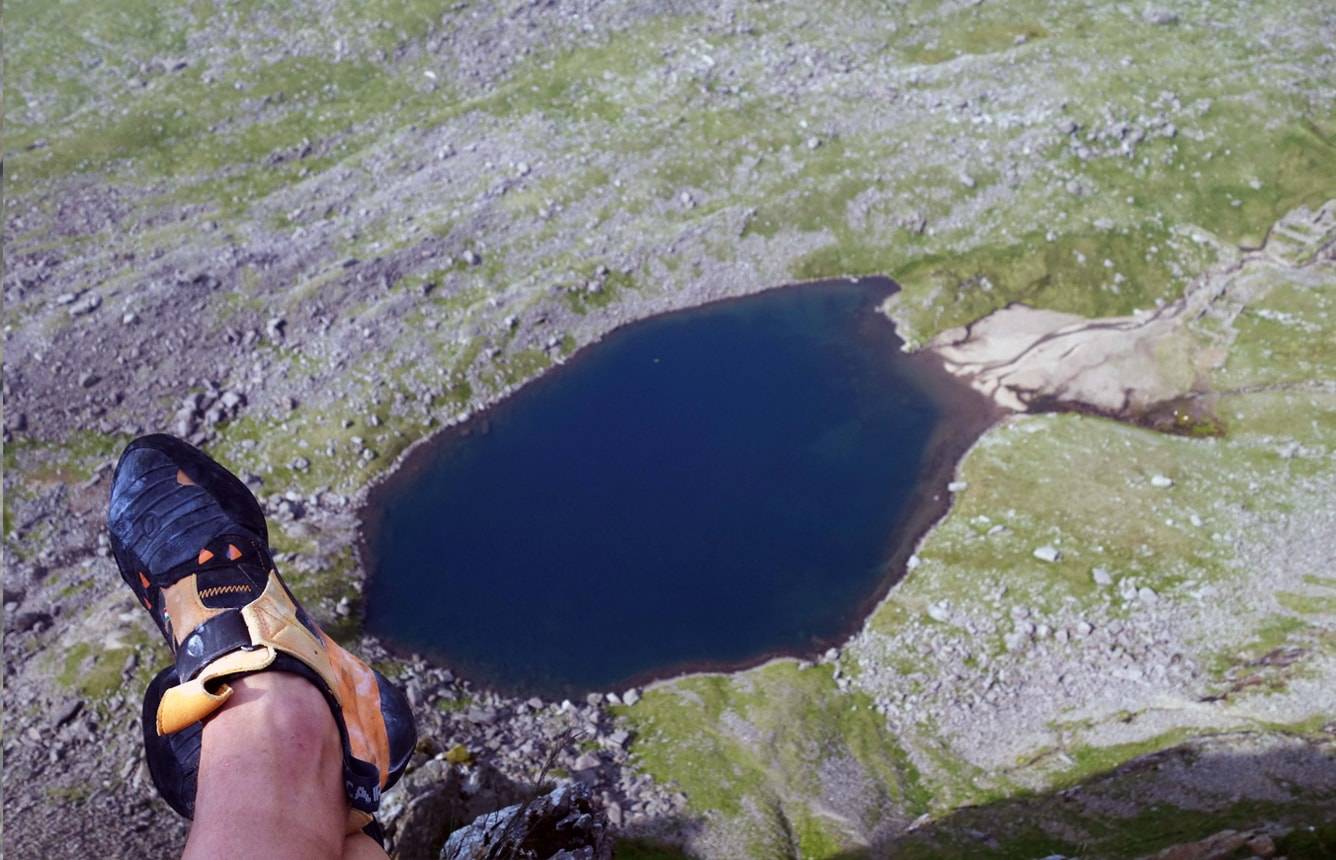 The view from the summit: the author looking down after soloing a classic route on Clogwyn Du'r Arddu, Snowdon, Wales. 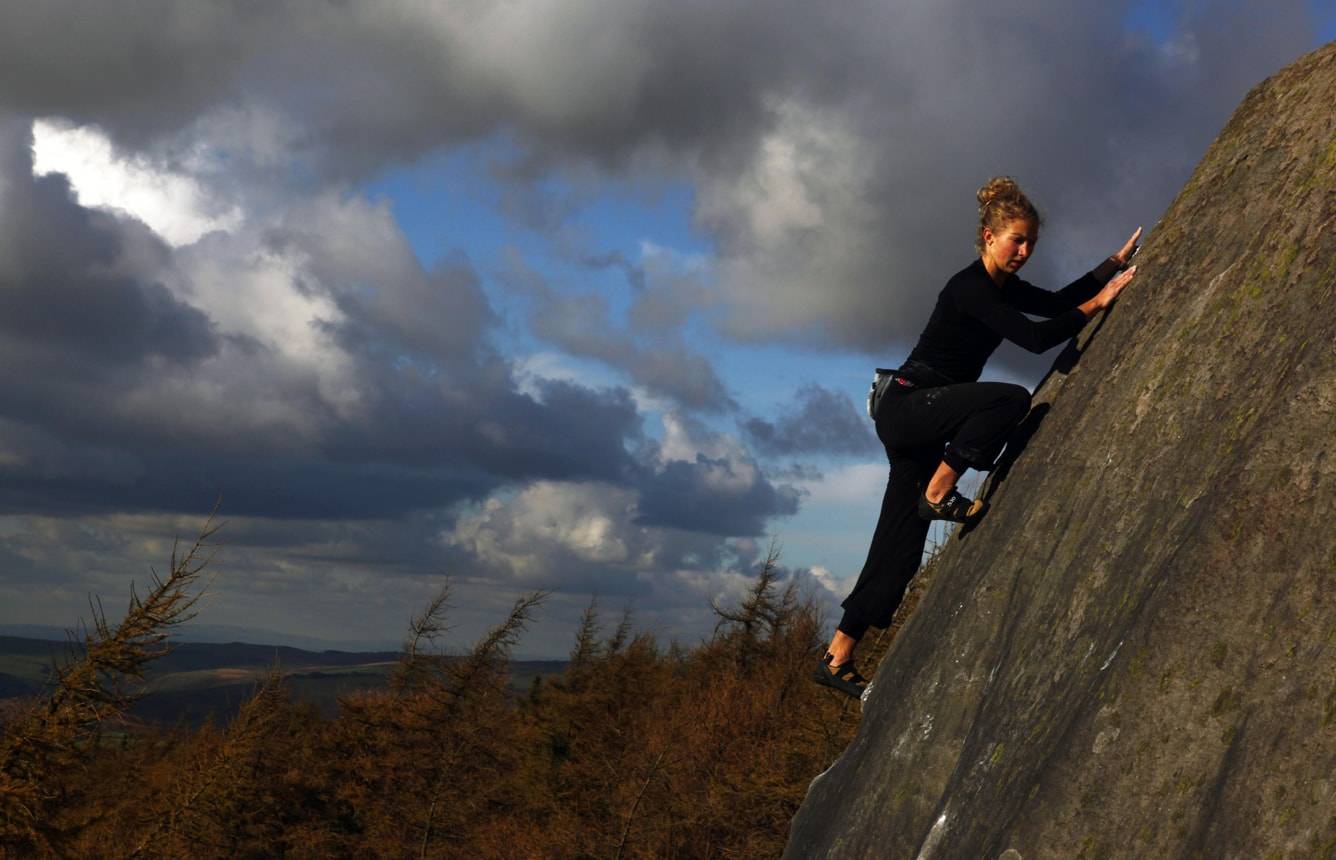 It is not a coincidence that the Olympic Games developed and flourished in Ancient Greece within an increasingly martial political environment, when Sparta was a rising power and Athens was the incumbent power. As the historian Thucydides pointed out, this scenario often leads to war (it is known as Thucydides’ trap). The clash between Athens and Sparta flared up most significantly in The Second Peloponnesian War (431–404 BC), the longest and most expensive war in Greek history.

The Ancient Greeks didn’t engage in free soloing, at least as far as we know, but their legacy of putting sport at the heart of Western civilisation remains a great one. In relation to what they achieved by doing that, it’s worth asking if the rising popularity of self-organised adventure sports in recent decades is a collective cultural response to the risk-averse pathologies of Western society: the constant drive to minimise danger, to mitigate personal responsibility, and the relentless instruction that death is something of which we should be afraid. Adventure sports, of course, are a rather good way out of the moral cul-de-sac represented by this nonsense.

The reason I love free soloing is that it is everything the ‘risk-averse pathologies’ I refer to above are not. It can remind us of the mastery human beings can be capable of. When I’m alone up there alone on the wall, I can move fast and efficiently in a dangerous environment, I must constantly make survival-critical decisions, and I am compelled to act with absolute concentration for every single second. Like the Greek facing the Spartan across the plain, I must use all of my fitness and intelligence to prevail, as I rediscover the old order anew.

David Pickford is the editor of BASE Magazine.